Would you like to switch to the accessible version of this site?

Don't need the accessible version of this site?

Dr. Scott Mortenson completed his undergraduate work at Northwest Missouri State University and then went on to graduate from the University of Missouri -Columbia's College of Veterinary Medicine in 1996.  He began his veterinary career in Illinois and then he and his wife, Dr. Sharon Mortenson moved to Greensboro in 2001, working at Pointe South Veterinary Hospital before purchasing Garden Creek Pet Clinic in June 2006.  He and the "Mrs. Dr. Mortenson" have two children, one dog (Penny), and four cats (Boomer, Newton, Kudzu, Ferris). 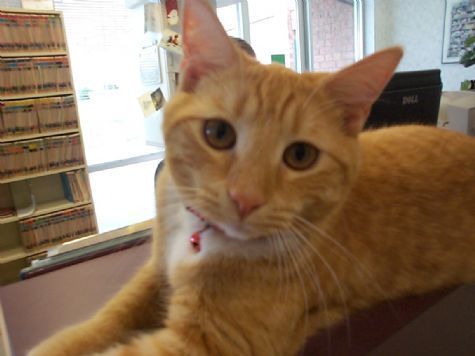 Earl has been our clinic cat since 2006. He was a rescue kitten and that stole the hearts of Garden Creek Pet Clinic. His favorite hobbies are eating and sleeping. He always lets us know what time it is based on how close he is hovering to his food bowl.

Ralphie showed up as a present for us just before Christmas 2012. A good Samaritan left him in a box at our door with blankets and toys. From the second we opened the box we were hooked. We had just lost our other clinic cat, Smokey, so he filled the hole in our hearts. He loves to snuggle up on your lap or shoulders, and is also very fond of breakfast and dinnertime.

Jackie has been with Garden Creek before even Dr. Mortenson. She started working for the original owners of Garden Creek in 1992. When Dr. Mortenson purchased the clinic in 2006 she decided to stay on and help build Garden Creek to what it is today. She is married with three children, one dog (Clover), and three cats (Smudge, Cheddar, and Marshmallow). She would take in every single stray cat in the world if she could.

Betsye joined Garden Creek when she moved to the area from Virginia in 2008. Since then she has been a staple of the place. She loves to make each day fun, and keep everyone laughing. She is married with one little girl and two dogs (Millie and Oliver).

Madison is another one of the familiar faces here at Garden Creek. She has been here since 2010, and is the resident MacGuyver. She can come up with a fix of some kind for just about anything. She has one dog (Cricket), and one cat (Duckie).

Jennifer came to Garden Creek in early 2019. She is the welcoming voice that you hear when you call us, and the kind face you see when you get to Garden Creek. She is married with three children. She has a dog (Princess) and a cat (Maizie).

Carlie joined the fun in 2019 when she moved to the area from Holly Springs. She completed the Garden Creek puzzle and is always trying to make sure everyone is in a good mood and smiling. She has two dogs (Kingston and Knox), one cat (Cleo), and one guinea pig (Theodore).

We look forward to hearing from you

Find us on the map